Problems with the linear module A350

A few months ago there was something terribly wrong with some of my engravings where the SM2 had a malfunction during a +20hour job and one of the modules of the Y-axes stalled… The engraving was horrible (will upload later maybe) and I had a serious issue with my SM2 that moment.

It was a little inconvenient that this happened two weeks before we went on holiday (october ´22), then a few other things in life were more important and late December I finally ordered a new module at a Dutch online shop specialized in 3D and laser kinda products.

Last week, January 18th, the module arrived and this weekend I installed the new bar of metal… Nothing happened. Checked all the wiring… nothing.
After I shortly connected the old broken module, things were moving again on the SM2. But, to my annoyance…

The new module isn´t that much into pressure from the hand. It doesn´t move. While my modules on the X and Z axes are movable with a push. Then I installed the new module again and there´s only a little movement now.

The new module only works on the last two cm´s of it´s rail/rod kinda thing. For the rest of it, it´s a very big sturdy Nope !

I´ve so many questions now. Does my replaced module still works? No because it´s like stuurdy and fixed like the new one. All the other components seem to work properly. But is this still a module thing, Or do I´ve to look at my controller board, the splitters between the modules or something else too?

What if I send back this new module to the shop and ask for a new one, but the problem is somewhere else in the machine?

This is just a little drawback and I hope to read similar experiences and how it was solved. Plus I hope to use the SM2 in the near future again too.

Be sure you’re not mixing linear module types (new and old).

I’ve ordered the 8mm speed version, not the 16mm version. As far as I know the SM2 introduced in 2020 was with these modules too?

It’s Complicated. The Kickstarter version of the Snapmaker 2 shipped with the “old” linear modules, which I don’t think are available any longer. What you bought was almost certainly a “new” linear module. I’m pretty sure the firmware won’t allow you to mix-and-match the two, even if you use an 8mm “new” module.

If that’s the problem, you can either replace all your linear modules or poke around and see if anyone will sell you a secondhand set of “old” modules (there are some people who replaced theirs and just have the old ones lying around, so you have a fair chance).

Wow, thnx for this reply, this seems a complicated issue to fix in the short term.

I don’t see it a realistic option to replace all modules/controller board.

(Anyone here that had won the lottery perhaps?)

You cant mix up old and new modules on one axis like z or y.

Maybe try the new module on x, hopefully you have some luck and it works again.

Snapmaker support is out of order because of chinese new year now.

If it is needed i could sell you a old linear module but its used and there is no warranty about, - if you have time wait for support and they send you a new old one. I am pretty sure they are able to…

Thank you Chris, I will try this out tomorrow!

Question, is it normal the old modules are easier to push by hand (manually) than the new modules?

Why can’t I move the plate on the module? Is it forbidden to move it by hand? I’ve owned the first SM too and it never seemed to be the problem, very rigid and reliable… why isn’t there any movement in it in this new one?
Or did I had to order the 16mm instead of the 8mm?

You can still order the old modules from support. I think they’re $150 each plus shipping. But you can probably pick up a set of 5 used ones on ebay for not much more.
And as others have said, it’s Chinese new year so everything is pretty much shut down.

I’m Dutch too and I have a spare set of used “Kickstarter rails” I’m willing to part with. You can message me if you’re interested.

Question, are you really sure @sdj544

I’m going to try this out tomorrow morning and I don’t want to damage my Snapmaker because it in the end it didnt work.

Therefore, is it normal the new modules are more rigid compared to the older modules? Because there isn’t any movement in the module except for maybe 2cm’s? I’ve owned the original SM and also this 2 and it never broke down because of a little movement by hand manually…

Sorry for my English sometimes 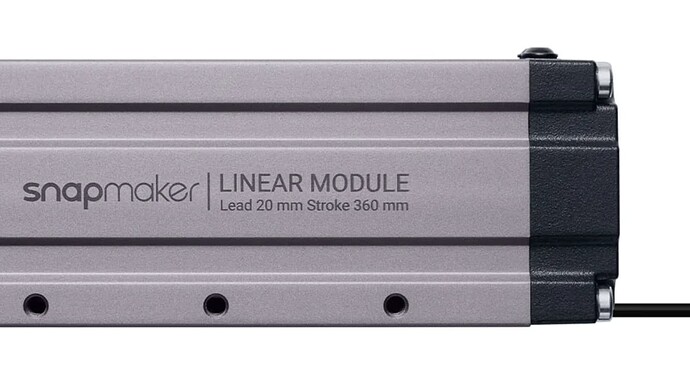 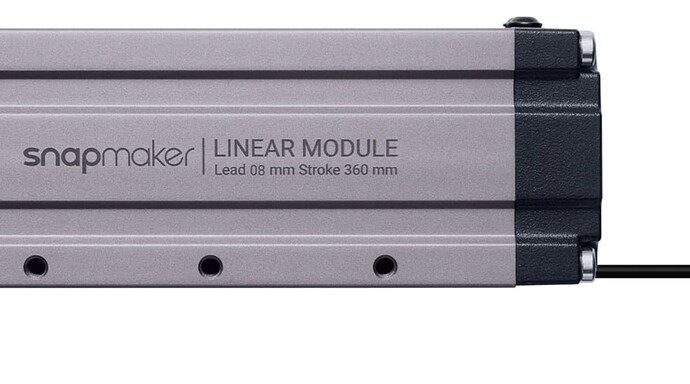 08mm are for z-axis (vertical) 20mm are for x and y. Old and new can’t be mixed. Need to all be old or all be new. The new firmware does have some checks that it runs and it won’t necessarily tell you that something is wrong. It will just stop working. Mismatched rails is one of those things.

There are basically three things that mainly seem to go wrong with the modules:
Broken limit switch. If it’s not homing properly or won’t stop while homing and tries to keep going that’s usually the culprit.

IC on Controller board getting burnt out. There was a batch that went out and was missing the little blue foam heat absorber pad (technical name I’m blanking out on). They had massive failures for a couple months before it got straightened out. If the pad falls off the components can over heat.

Internal bearings on bracket wearing out/falling apart. This seems to be fairly rare. I’ve ran mine heavy duty and seen no wear. Just some play that can/needs to be adjusted occasionally.

I think the plugs/cables have proven to be pretty robust but I, and others, have found sometimes unplugging and replugging them has fixed things. (always with power off)

Thanks for your reply.

Yes my Snapmaker has old modules and this new have markings on them, assuming this is the module for the X axes, so in the beginning, I ordered the wrong module. In the end, I’m still in doubt this new module is broken or something because it doesn’t move as it (I assume?) should be more movable by hand?

I’ve to send it back to the supplier and hopefully they are ok with my explanation I bought the wrong module + I can’t mix the new and old modules. But then also the question if this thing is broken or not?

I guess, this is no broken module.
I know the original machine and this modules where easy to push.

The upgraded rails of 2.0 are really hard or not to push, this is normal.

A few days later, I picked up the old modules thanks to @Mayco and very happy, this was the solution. It works and I can use and play with my Snapmaker again