I have been making some post around different parts of the forum with the same/similar problem. I am now on 2.9 firmware on the controller, but I am not sure what actually is the problem. The print stops randomly in the exact same print. I am currently only printing my Incredible Basic IKEA Bittergürka Quarter Circle Pot. These are the four first printed pots (with successful design), where one of them stopped mid print. 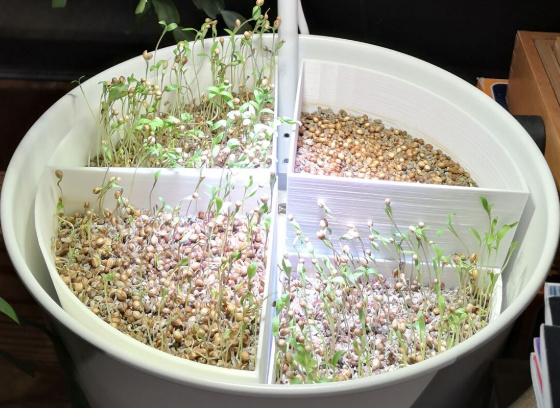 It should be about 11-12cm high, but the last 10ish prints have ended up stopping at between layer 3-4 to 4-5cm high (one missing a cm from being finished). It just stops, and when I go to have a look, I can see the printhead have stopped mid print and temperature on display is dropping down. Some of the time jog mode works ok, but other times I have to turn controller of and on again before its working. After thinking it was JS-software crashing that created the problem, I did the last three prints directly from the controller, but no luck. First print printed for 2-3 hours, before stopping, while the two next stopped at layer 3-4.

Collection of some of the failed attempts, with one finished (yippie-ay-kayey!) at the left.

Here its stopped and cooled down. Could seem like the controller somehow has reset the print and is just ready for a new.

Does anyone have any idea what is going wrong?

Have you witnessed it stopping? I’m wondering if the controller resets (goes back to the bootup screen), before displaying a cooling head and bed.

Never been able to see it, but I have heard it stop, then around corner to see if I could see something extraordinary (10ish seconds), but all I saw was temperature dropping, set temperatures zeroed out and duration zeroed out. Everything else was normal. I just confirmed that the port 5 for z-axis makes it print the same layer over and over at some random layer. I moved it to port 4 mid print now and it continued to create new layers in z-axis. So I guess the controller is not 100%.

Actually I was looking at it just now, and it stopped while I was watching. The printhead stopped and touchscreen looked normal, then after 2-3 seconds, I saw Snapmaker logo on white background filling touchscreen for a second or two, then it was back to regular screen and everything was reset apart from current temperatures. The layer red-lighted is where I switched from port 5 to port 4.

If the controller is bad and considering the warranty is kind of short, I had a look in shop and its not listed there. Do they sell the controller separate or am I left to soldering?

I’m not in the mood to buy a whole new Snapmaker after making five whole flowerpots, as that cost wise would put them into Chinese porcelain category soon…

It sounds like the controller is restarting – that’s the same behavior it does after being turned on.

There are a number of potential explanations. The power brick could be bad. If you have a laptop charger that fits, you could give that a try. My snapmaker brick output 24V @ 5A. Most laptop chargers output ~19V near that amperage. It should be close enough that it’ll work, maybe just print a little slower. I’m comfortable doing this test on my snapmaker, but you may not be. If you’re not comfortable fudging the voltage like that, two car batteries hooked up in series will give you 24V, and plenty of juice to run for a while.

Your electricity could have random quick blips. PC power supplies have enough capacitance that they can handle a short interruption, but the smaller power bricks don’t. If you notice your lights flicker at the same time the snapmaker resets, a small UPS could help.

If none of those help, then I’d contact their support team at support@snapmaker.com .

@Neverest It seems your printer restarted and caused the sudden stop. Actually only the supply power can cause the restart. I think there should be something wrong with the power supply. I wonder if you can find a same power(24V，5A) and try if the problem still exits. Looking forward to your reply. Thanks.

I’ll have a look if I can find something at work or buy a generic one. I just checked that all parts were fitting ok on the adapter and only thing to remark was that it was a bit wiggly where it plugs into the controller, but I don’t think it would be enough to cause a split second power loss. I don’t have issues with power loss in the building, so I doubt that would be the reason, but I’ll check if there could be the some issue with the electrical outlet adapter I use.
Thanks for suggestions.

I was about to write that it was resolved after easter some time, but as I was writing the post the printer stopped mid print. I figured I would try some more prints before responding, but I did not print anything until august, so I forgot about it. The prints done in august did not stop, so I think I have concluded that it was split second power outages. The electrical adapter running my pc and snapmaker was the culprit. It had an on/off button that had gone bad, as you can see in the picture.